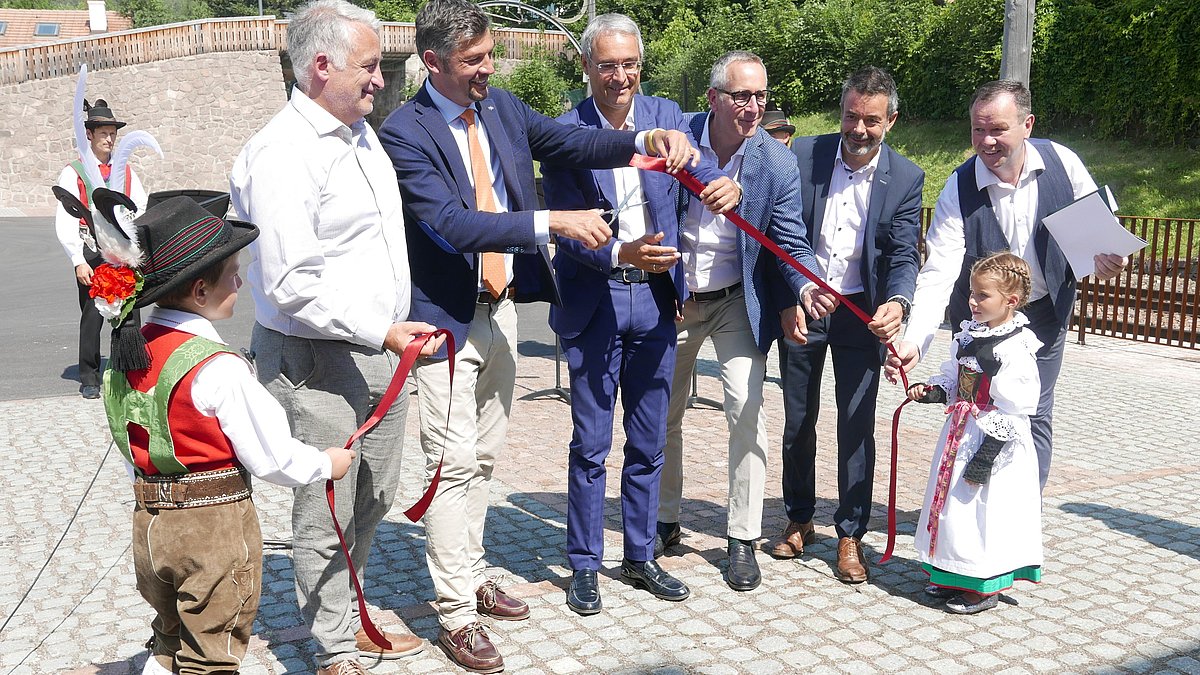 Today, 13 August 2021, the Renon/Ritten light railway celebrates a major anniversary: 114 years of service. And with the construction works to remodel the station forecourt in Collalbo/Klobenstein completed just in time for the big day, the brand-new plaza has now been officially inaugurated – in the presence of South Tyrol Minister for Mobility Daniel Alfreider, mayor Paul Lintner, Markus Untermarzoner of the Renon/Ritten Light Railway Committee and Joachim Dejaco, Director of STA – Südtiroler Transportstrukturen AG/Strutture Trasporto Alto Adige SpA.

The Renon/Ritten plateau and its narrow-gauge trolley train have been an inseparable union for 114 years – with the railway being much more than a mere mobility service: In the early days, it greatly boosted both the economy and tourism, and today, it faithfully continues to fuse tradition and modernity. This key characteristic has long turned the Renon/Ritten light railway into a popular attraction for people from near and far alike.

With the remodelling project in Collalbo/Klobenstein – initially launched in April – now concluded, the station is all set to shine in renewed splendour.
The redevelopment of the station forecourt is, for the time being, the final step in a comprehensive mobility project on the Renon/Ritten plateau. Following the 2009 launch of the cable-car, the 2014 opening of a new depot in Soprabolzano/Oberbozen, the 2017 redesign of Piazza Riehl/Riehlplatz in Soprabolzano/Oberbozen and the addition of a new stop, Kaiserau – in close proximity to the Civil Defence Centre in Collalbo/Klobenstein –, another much-anticipated ambition has now come true.
The brand-new station forecourt is designed to bring together locals and guests alike and be a place of interaction and meeting. Its new bicycle parking spaces and the nearby Mobility Centre, from which the many near and far-away hamlets are served by bus, top off an already model recipe for integrating different public-transport services at Renon/Ritten.

STA - Südtiroler Transportstrukturen AG/Strutture Trasporto Alto Adige SpA was commissioned with the remodelling project; the construction works were carried out by Kröss GmbH, Schmiede Gasser and Trojer GmbH, with architect Roland Baldi at the helm as head of design and construction supervisor.